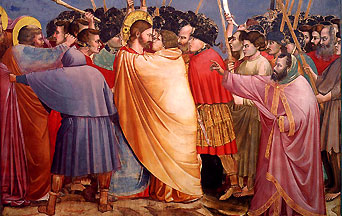 The Vatican Newspaper’s Rehabilitation of Judas During Holy Week

On Holy Thursday, April 1, L’Osservatore Romano, the Vatican’s daily newspaper, published a front-page editorial illustrated by an obscene and sacrilegious painting. It shows a naked, resurrected Jesus, caressing the lifeless head of the traitor, Judas Iscariot, who is wearing nothing but a red loincloth

No Place for Mary, the Co-Redemptrix of the Human Race

Like her Divine Son, Mary Most Holy was forgotten. She whom we honor and venerate as Our Lady of Sorrows. She whom the Church has wept with for 2,000 years. She whom we try to comfort when praying the Stabat Mater: “At the Cross her station keeping, stood the mournful Mother weeping, close to her Son to the last.

Pope Francis has spoken affectionately of Judas countless times, implying that the traitor was saved, but without stating this clearly, as is his custom. As proof, he presents a sculptured capital in the medieval Benedictine abbey church of Sainte-Marie-Madeleine in Vézelay, France.

In the just mentioned book, Pope Francis again refers to that capital and Judas’s possible salvation. After saying that Judas hanged himself, he continues: “But there is one thing that makes me think that the story of Judas does not end there… Maybe someone will think: ‘This Pope is a heretic…’ But no! Go and look at a medieval column in the basilica of Saint Mary Magdalene in Vézelay, Burgundy. The men of the Middle Ages did catechesis using sculptures, images. In that column, on one side you have Judas hanged, but on the other is the Good Shepherd who loads him on his shoulders and takes him away.

The Cainites, an Early Church Gnostic Sect of Judas Worshippers

They were known as the Cainites because they venerated as saints, all those condemned in Holy Writ. The Cainites presented these evildoers as spiritual heroes: Cain (who murdered his brother Abel), the Sodomites (notorious for their sexual depravity), Esau (who sold his birthright for a plate of lentils, then vowed to kill Jacob), Korah (who led a rebellion against Moses), and especially the “son of perdition,” Judas Iscariot.

These Gnostics deemed most aberrant sexual practices (including sodomy) as a religious duty, and some invoked a special angel as they performed their immoral acts.

Their doctrines are summarized in apocryphal writing, the so-called “Gospel of Judas.”