THIS IS BERGOGLIO'S FAVOURITE. 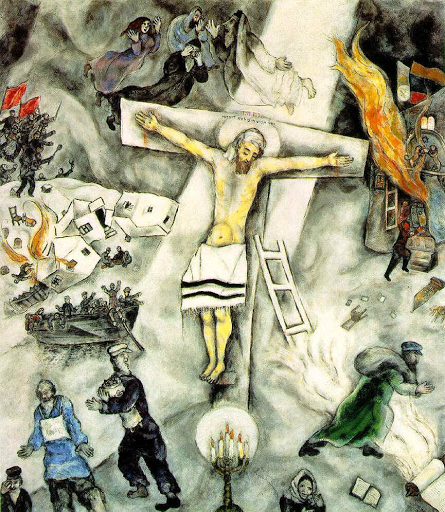 Source and video available at below link ......
http://callmejorgebergoglio.blogspot.com/2015/10/chagalls-hasidic-jesus.html?utm_source=feedburner&utm_medium=email&utm_campaign=Feed%3A+CallMeJorge+%28Call+Me+Jorge...%29
Moishe Shagal (Marc  Chagall) was one of the Jewish émigrés involved in the ‘ressourcement’ movement which played a prominent role in setting the table for Vatican II and was the foundation for religious change (of all forms of Christianity) in the 20th century. Chagall consulted with the Lubavitcher Rebbe as well as Israeli president Chaim Weizmann on using Christian imagery in artwork. Pope Francis’ favorite painting, White Crucifixion, is by him.
Chagall paints Jesus in the manner of a hasidic Jew, dutifully practicing what the Rebbes taught and practiced. Chagall in his letter to Weizmann wrote, “the presence of a Jewish painting in a church might be good propaganda for our people” and further states he paints images for the Christians worshippers, “symbolizing the suffering of the martyred Jewish people.” (p. 180, Marc Chagall by Jonathan Wilson)  Rabbi Adin Even-Israel Steinsaltz explains this technique on page 135 of My Rebbe, “[It] was an act of “conquest” and “transformation” (as the concept is known in chasidic teaching), appropriating a foreign entity for the sake of holiness - a common theme in the Rebbe’s teachings.”

More on the White Crucifixion