THE JONES AFFAIR IS OUR AFFAIR


ALAN JONES, Aussie radio host, has been called a misogynist for suggesting the PM tell Jacinda Ardern, the PM of NZ, to "Put a Sock In It", or words to that effect. His critics are waging a war to have him deplatformed and are running a campaign with the stations advertisers to drop him. This is not about Jones or his character, this is about us; about our cultural expressions, our axioms, and our customs.

The attacks emanate from the usual suspects of the left, the cultural Marxists. As globalists, their general aims are to wreck our uniqueness of expression and customs to homogenize the population under the false and contradictory principle of multiculturalism which, in fact, destroys difference and diversity. We must be converted into a single, controlled mass of tolerant relativists who can be criminalized for offending the perpetually offended virtue-signalers and snowflakes of minorities and intersectionals so that their waving of the hammer and sickle is not objected to. They need to be freed up to hyper-sexualize our children, convince them that they were born in the wrong body, and develop their army of non-procreating homosexuals to reduce the population and rid the country of conservative Christians who stand in their way with their abominable, restrictive moralities and imaginary friend in the sky. 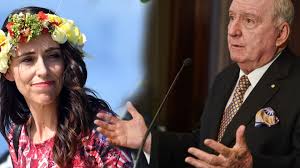 A reckoning is coming.

An Aussie can run into the PM in the street and feel free to say: "G'day Scott, how about you pull your finger out with the coal mines, mate?" without being hauled off to the clink. No undue offense is intended and none would be taken. Were the PM a female, it would not be considered a misogynistic remark, unless you went by the name of Tony Abbott and glanced at your watch while she was speaking. Nor would it imply that his finger was in any particular location, literally. It's our way, our casualness, our egalitarianism. At least it has been for a few hundred years. Similarly, 'putting a sock in it' is a euphamism, it's metaphoric, but to the leftist flakes it's literal. They deliberately interpret such cheeky banalities either because they are ignorant products of a dumbed down educational process or else they weaponize their misinterpretation to stifle our axioms and to change our unique customs. It's their weapon of war against our ways.

This activism is being driven by Melbourne's soy boy Green Pollie, Adam the Bandt, and the page titled "F***ING MAD WITCHES" with their supposed 50,000 followers who have hounded the advertisers to desert the radio program. Many of them have complied in the way that only corporations with a political agenda can. These pretenders of femininity must be so self-loathing about their abilities to attract a male complement and compliment, that they adopt the persona of the Sistahood Of Aleister Crowley interbred with oily dregs of waste to spew their vitriol in vile language against mere euphamisms and metaphors. They are nothing but dykey SJW's devoid of morality and principle, judging by their postings. Such under-achievers are sour that they are not noticed and their narcissism is fulfilled in playing the "Bad Bitches" of the anti-hero genre to appear cooool, just ever so cool. "Look at moi, look at moi!" We have. You're ugly, very ugly, and your agenda is patent. Bugger orf, shove a sock in it, and go read some C.J.Dennis.
at August 23, 2019 No comments: