The Pence appointed Dr. Fauci, along with his sidekick, Dr. Birx, are supposedly heading the fight to mitigate the virus, SARS-Cov2, which results in the illness known as Covid-19 and declared to be a pandemic which in turn has prompted governments to severely restrict the movements of citizens to the extent of denying natural rights. By now, this is all well known.

What is not well known is that Fauci and Birx have intimate ties, personal and financial, to the big players in the Pharma Deep State, to wit: Bill Gates, George Soros, and other individuals as well as W.H.O., ID2020, WEF, PREPFAR, and various other organisations, along with vaccine and drug companies, especially Burroughs Wellcome. I can add to these the U.S. Catholic Conference of Bishops and the Catholic Relief Service [which I will deal with in Part 2].

WHY HAVE I CLAIMED THAT THEY "SUPPOSEDLY LEAD THE FIGHT TO MITIGATE THE EFFECTS OF COVID-19"?  I have said this based on their modus operandi thus far, which has been [1] to promulgate overblown modeling of the infected and the likely death rate to add a panic and fear element to gain the subservience of the population to their instructions, and [2] to attribute deaths to Covid-19 which may be due to other causes.

AND WHY WOULD THEY DO THIS? In short: to gain time to bring a vaccine or drug on the market from which they can profit. Hence, this is the reason that Dr. Fauci in particular, along with others with a vested interest, have downplayed the efficacy of the anti-malarial drug, Chloroquine, [as well as other drugs mainly associated with HIV mitigation], which in some jurisdictions has been banned or has had approval delayed. For the sake of brevity I will omit the many links available to support this claim. Links are readily available showing Bill Gates advocating for the world population to be vaccinated - along with the inclusion of a nano-chip which certifies said vaccination. Along with this plea, Gates has said he does not want to see a lot of survivors with immunity !! [Refer the TED talks]. I will here give away the Gotcha Moment very early by telling you that, thanks to the research of "Amazing Polly", there is a Ms. Birx [unknown yet if she is related], who works directly for the Gates Foundation, a daughter is connected to Rep, Feinstein whose chauffeur of 20 years was known to be a Chinese CCP spy.

Below is pictured from 1990 a protest against Fauci by the gay community. The reason for this protest was that Fauci was heading the fight against AIDS and was not considered to be doing enough to employ a mitigating medication to stop deaths from the epidemic of HIV. 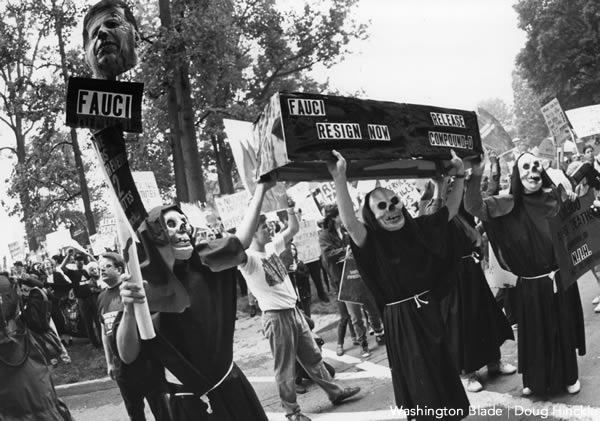 Fauci pressured the government and FDA to rush through a medication for widespread use before trials were completed known as AZT. The drug AZT was a toxin used unsuccessfully for cancer 20 years earlier. It was totally unnecessary according to some virologists as shown in the video below by Prof. E.Michael Jones who claims additionally that Fauci's actions were responsible for many deaths. Further, he claims that Fauci was desperate to appease the homosexual community by displaying that the heterosexual were also susceptible to AIDS to obviate the stigma attached to gays and their lifestyle. Prof. Jones now makes the analogy with COVID-19 in that Fauci is indulging in scientism over reason in his tactics to design the circumstances of the need to lockdown society until the vaccine is ready. BUT, dear reader, I have only just noted references suggesting that there are moves to stop resisting the approval of Chloroquinine as there are moves to COMBINE IT WITH AZT as a proprietary medication !! [I will have to add references to this at a later date]. News is coming out daily that vaccine trials are progressing quickly anyway, so more will be added on that subject later.

NOW, BACK TO THE [1] Modeling false paradigm, and [2] The attribution of uncertain causes of deaths to COVID-19.


These snaps ought to be enough to cast doubt and suspicion on how deaths are being recorded so I will let them speak for themselves.

I haven't heard Dr. Birx reiterate the above instructions but this tweeter does as follows....

Well, Dr. Birx just said it. Anyone in U.S. who dies with Covid 19, regardless of what else may be wrong, is now being recorded as a Covid 19 death.

There are a multitude of references made by qualified people. I will take the view of Dr. Wm.Briggs. SOURCE: https://wmbriggs.com/post/30236/

Yesterday I showed the deaths/cases plot. I speculated the “plot is still rocketing northwards means (1) cases are under-reported (lack of measurement), (2) deaths over-attributed (dying with is not same as dying from), or (3) both.” (1) is surely happening, but Hume’s tweet is proof (2) is, too.
Adjusting numbers is one good way to boost numbers to get them to align closer to forecasts.
Blaze has a list (thanks to David Legates for this) of model predictions.
Summary (all are quotes):
BMJ has one of the first papers on the subject: Prediction models for diagnosis and prognosis of covid-19 infection: systematic review and critical appraisal, by Wynants et al.

…27 studies describing 31 prediction models were included…
This review indicates that proposed models are poorly reported, at high risk of bias, and their reported performance is probably optimistic. Immediate sharing of well documented individual participant data from covid-19 studies is needed for collaborative efforts to develop more rigorous prediction models and validate existing ones…Methodological guidance should be followed because unreliable predictions could cause more harm than benefit in guiding clinical decisions.

This is harsh considering we’re not even at the end, yet.
The AP has an article by the usual suspects expressing wonder scientific models can be wrong: Modeling coronavirus: Uncertainty is the only certainty’.

The only problem with this bit of relatively good news? It’s almost certainly wrong. All models are wrong. Some are just less wrong than others — and those are the ones that public health officials rely on.
Welcome to the grimace-and-bear-it world of modeling.

NOW FOR THE E.MICHAEL JONES VIEW. It is rather long at 55 mins but an abbreviated view from 8 to 20 mins would be useful. And the host is annoying, but the information and the analogy they make are worth the experience. [PART 2 WILL FOLLOW. If you find any glaring errors above, please let me know as this has been put together in some haste].

ADDENDUM: Related to the above is the series by Jon Rappoport who has researched infectious disease epidemics for around 20 years. A minority will be on side with his view that the virus causing COVID-19 is not a great danger and is further largely an invented narrative. In turning the tables he infers that the technocrats and plutocrats are conspirators-with-a-theory. Accept his views or not, it is an opinion to throw in the ring and he makes some interesting points, especially on PCR and anti-body testing.
SEE HERE: https://blog.nomorefakenews.com/2020/04/08/corona-creating-illusion-of-pandemic-through-diagnostic-test/
at April 09, 2020