The front praecipitium, the tergo lupi.

For FratresInUnum.com, July 29, 2021 – The end of every law is the common good. Absent such a principle, there is no law, but only a simulacrum. As we have already abundantly demonstrated in our previous analyses of "Traditionis Custodes", this is your case. The pontifical authority is committed to a pure and simple act of violence, of aggression to the ecclesial body, and therefore can and must be resisted. 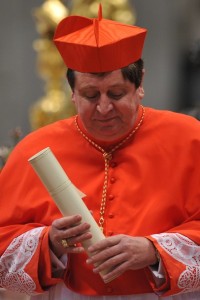 Such an act is but the decree of a death penalty for traditionalist Congregations. Which, by the way, comes in handy with the whole content of Motu Proprio. If traditional groups need to be restricted until they disappear, what will seminaries be founded in order to continue teaching the ancient liturgy? Nothing more coherent than extinguishing them altogether.

However, Bergoglio is not a man of words, but of actions. He would never declare such a thing, prefer to act without saying it or, which is even better, act without acting, letting another get his hands dirty in his place: in this case, the eminent Prefect of the Congregation, none other than the Brazilian Cardinal João Braz de Aviz.

To whom is Francis delivering the traditionalist institutes?

To the one who said in an interview:

"We are working hard to transform training. We must think of formation from the womb to the last breath [...]. Everything counts in training, it cannot be said that one thing is training and the other is not [...] it is necessary to change a lot [...] Many things of tradition, many of which belong to the culture of a past time, no longer work. [...] We have life forms that are linked to our founders but are not essential. A certain way of praying, a certain way of dressing, giving more importance to certain things that are not so important and giving little to others that are important. This global view of the whole, we didn't have it before, but now we do."

Don João Braz de Aviz does not tolerate anything from other times, relentlessly eliminating even his white hair.

Many congregations were commatose in the time of Braz de Aviz. For example, the Little Sisters of Mary, Mother of the Redeemer, had an intervention in which it was said that they would not touch their charism, but only in the way and live it. The sisters were criticized for praying too much (sic!). The result: almost all of them flocked to the institute.

The Secretary of the Congregation, Mons. Carballo said in an interview that "for consecrated men, the Council (Vatican II) is a point that cannot be negotiated. And he said that those who seek in the reforms of Vatican II all the evils of religious life 'deny the presence of the Holy Spirit in the Church'. He explained that in the Congregation for Consecrated Life they are 'especially concerned' about this theme: we are seeing real deviations. Especially because 'not a few institutes give not only pre-conciliar formation, but also anti-conciliar formation. That's not admissible, it's putting it out of history. It is something that concerns us a lot in the Congregation.'"

It was precisely this Congregation that mercifully commissiou the Franciscans of the Immaculate, accusing them of "praying in Latin, living poverty, not adhering to 'gender theology' (whatever it is) and for making a vow to Our Lady". The result of the commisariation was the deupation of the Congregation, with the expulsion of the founder and his isolation in a forced cloister, and the dissipation of its members, so that the shining Institute practically ended.

In a later interview, Cardinal Aviz summarized the problem of the Franciscans of the Immaculate: "The problem is the 'denial of the Council' hidden behind the 'reference to the extraordinary rite'".

These are just two examples of many others that could be made.

Recently, Cardinal Braz de Aviz said that "the following of Christ is our supreme rule. Today we were with the Holy Father, and the Pope is concerned by some traditionalist positions, also within religious life." According to him, in an interview with Veja Magazine, the Pope would have confided to him: "I ask God for the grace to live long enough for reforms in the Church to be irreversible."

In short, Art. 6 not only means a change of competence, but is a very clear death sentence for the Institutes that were linked to the Ecclesia Dei Commission. The reasons for commisarias and deletions will meet later, are just excuses to be invented. The fact is that the good of such institutes is not intended. Francis realizes his perfect cornering, according to the ancient Latin adage: "from the front, the precipice, from behind, the wolves" – "the praecipitium fountain, the lupi tergo".